SUMMER TIME AND THE PLAYIN' WAS EASY...FUN TOO

ALL WE NEEDED WAS A BAT AND BALL
SUMMER TIME AND THE PLAYING WAS EASY...ALWAYS LOTS OF FUN TOO!

Let's talk baseball...The kind of baseball that was played by old timers like me in small towns three-quarters of a century ago.

"You mean they actually played baseball back then?" some of you young whipper snappers may ask.  You bet your sweet life they did and lots of it too, seven days a week from late May to early October at least.  As the weather grew cooler, we switched to a version of scrub football and eventually pick-up hockey on a frozen pond or a pad of ice that was cleared on the Sydenham River.  Regardless of the season, the same unwritten "kids rule" always prevailed.

There was no coach or adult supervisor constantly on the scene with their own agenda of trying to live a fantasy of stardom through our young lives.

It was not the organized, well-coached, restrictively expensive game that it is available to kids today.  You didn't need baseball shoes, uniforms, coaches and umpires to play the "scrub" baseball that I grew up on.  All that was required was an old bat (cracked or otherwise), any kind of ball and an open field anywhere in town.  Throw in a dozen or so boys and you had the makings of a rip-roaring game.  Heck, you didn't even need a glove if you didn't have one.  Players up to bat always left their gloves on the field, to be used by others if needed.  When some lucky duck showed up with a new glove, everyone wanted to use it.

I was always reluctant to let someone else use my glove, but I went along with the tradition just the same.  I was a lefty (southpaw) and it made matters worse for me when another player put my glove on the wrong hand.  It just never felt the same after that and it would take another day of work to get it back into the shape of my hand again.  I went through gallons of Neatsfoot Oil in those days applying it liberally to my glove two or three times a week to preserve the leather, keep it soft and pliable and to retain a deep pocket for catching balls.  I would literally pound that pocket with a ball or my fist for hours at a time. 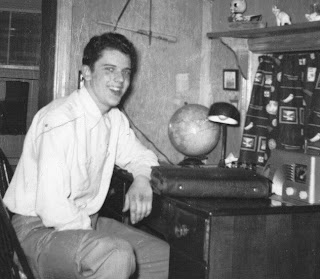 If you look at the photo to the left, you will notice that the knuckles on my left hand were permanently stained from endlessly punching my glove with my fist.  More than once my mother was heard to say, "Dick, go wash your hands and take a scrub brush to your knuckles."

By today's standards, our gloves seem tiny now but they felt impressive then, open in the back with a broad strap at the wrist that fastened with a flat brass button.  It was not unusual to strap the glove to a belt when not using it in a game. There might be a larger first baseman's mitt in the collection of gloves but almost never a catcher's mitt; and if there was, it would be big, rigid, round and heavy, and likely to be worn by someone playing the outfield, since we didn't use catchers in our pickup games.  Discarded matresses and box springs were great backstops.  As I grew older and started playing a more organized brand of baseball, I always had two gloves, one a fingered model for when I pitched and the other a first baseman's mitt for playing "first sack".

I guess I was about eight years old when I played my first baseball game -- with a group of older guys who had gathered at Jackson Park in the old Market Square.  I came home that evening and announced to my folks that I had just played baseball.  "You did?" said my surprised father.  "What position did you play?"  I don't think I really played a position, just stood in the outfield for most of the time, and the only position that I could think of was first base.  So, I replied "first base".

"Do you like first base," asked my dad, "because if you do you will need a first baseman's mitt."  He went out the next day and bought two first baseman's mitts from Mulhern's Sporting Goods Store in Chatham.-- one for me and the other for him so that we could start playing catch.  My mother just about hit the roof. The two gloves had just cost the equivalent of a week's worth of groceries.  I automatically became a first baseman because I was the only kid in town with a first baseman's mitt in those days.
I can't believe that youngsters playing minor baseball today can have fonder memories of baseball than kids who grew up in the 1930s and '40s.  We played long and hard and just for the fun of it.  You did not necessarily have to be a "good" player, just willing to join in.  Heck, none of us were "good" for that matter, we just emulated the older guys who had been playing a little longer.  We might have only three or four on a side, but we played for hours, paying no attention to the time or the innings.  The game usually ended when it started getting dark or we got hungry -- whichever came first.  When I wasn't playing in one of our scrub games, I was front and centre shagging flies at practices of the town's junior and senior teams.  Generally I would come straight home and play catch with my dad until dark, entertaining him with what I had just heard and observed on the baseball field with the older select players in town.

As my fastball began to increase in velocity, my dad took his mitt to shoemaker Clarence Breaton to have an extra layer of felt padding stitched into it.  The stitches for the padding can be seen in the accompanying photo.  All the gloves are currently displayed prominently on the wall of my office/study at home.

In the 1940s, there were two baseball diamonds in my hometown of Dresden, but for some unexplained reason we only used them for more formal games with teams from another neighborhood.  We seemed to feel more at home on the clumpy, rough grass of an adjacent field.  Pieces of wood or stones were used for home plate and the bases, resulting in many a turned ankle.  The foul lines were imaginary and close plays on the bases were generally settled with minimal disagreement.  Older guys served as self-appointed arbiters most of the time.

When it came to choosing up sides for a game, someone would softly toss a bat to two of the older, better players.  One of the selected captains would catch the bat with one hand and the other would place a hand above his on the bat.  They would continue alternating grips on the bat until there was no more room for another fist.  The last one with a grip on the bat would get the first pick of available players.  It was not nice to be picked last, but that was the way it was.  I honestly think that players picked last always tried a little harder with the hope of being selected higher up the order for the next game.  Many life lessons were learned that way.

The always eloquent Zane Grey once remarked, the chosing-up ceremony on "every green common, vacant lot and public square, attested  to the ruling passions of a youthful generation."  He believed that because boys were chosen according to ability, sandlot ball marked one place "where caste is lost...Ragamuffins and velvet-breached, white-collared boys stand in that equality which augers well for our country."

The baseballs we used were scuffed and discolored from the dirt and grass -- and were often very wonky.  After much use the threads along the seams would fray and break and the leather cover would eventually lift.  As more threads broke, the loose edge became larger and after a while it flapped when the ball was thown and made a brisk zinging sound when hit sharply.  Once in a while a strong kid would hit the ball so hard that the leather cover would tear completely off the ball, but that did not stop us from playing with it.  It was not unusual to see balls hit past the infield with a thin white line of string trailing behind.

More often than not, when a ball lost its cover we would take it home and wrap it in black tire tape.  The repair was only temporary, however, and we would have to keep re-wrapping the ball time and again.

Bats, of course, were made of wood -- no aluminum.  If we had more than one bat for a game, we considered it a luxury.  More often than not, the bats were broken castoffs from the senior and junior teams in town.  We hammered small tacks or nails into the wood to hold the cracked section against the body of the bat and then we'd wind tape along the handle from beyond one end of the crack to the other.  There were times when we used a lot of nails and a lot of tape on those old bats.

We were ideally positioned in Dresden to pick up bats from the O. & W. McVean Factory where Louisville Sluggers were manufactured for the Hillerich and Bradsby Company in the U.S.A.  I hung on to one of those Dresden-made Louisville Slugger bats for quite a few years but foolishly discarded it before I realized the value.  Now, all I have is a photo of one of the bats (see below), thanks to Margaret Rigsby whose father Andrew was manager at O. & W. during the period.
﻿
I think that I was about 14 in 1951 when I got my first uniform and pair of spikes after making the roster of the newly-formed Dresden Midgets in the Southern Counties Baseball League (see photo to the left).  I developed into a pretty fair baseball player after that, not because of any special coaching that I may have had, but because of all the hours I spent playing those scrub pickup games with my friends during the formative years in the 1940s -- just for the fun of it.  I think that I was a lucky kid!  Look at all the fond memories that I have to this day.  I wouldn't trade that period of my life for anything.

NOTE FROM DICK:  If you have a couple of minutes before you leave the site, take the time to view the above video that I created some time ago as a tribute to kids who play the game of baseball today.  It is for oldtimers who still love the game too.